Before you sulk and sigh because you’ve been reminded that witches, wizards, and Hogwarts are all fiction, there is something you can still look forward to franchise merchandise.

Harry Potter fanatics can enjoy wizard’s chess in real life, too; just don’t expect the pieces to move by themselves because The Harry Potter Final Challenge Chess Set brings the magic of the big screen and book series to your home. This Harry Potter chess set will encourage fans to get interested in the game of chess as they play along, imagining that the pieces are alive.

If you are interested in getting one for yourself or the Potterhead in your life, this review will give you a preview of everything you need to know. Let me help you with the key features, some excellent advantages over other chess sets, and also let you know any critical issues that you may need to be aware of.

The Final Challenge Chess Set is a remarkable recreation, as seen in Harry Potter and the Sorcerer’s Stone.

The set comes complete with a striking playing board display measuring 20 x 20 inches.

One of the most significant advantages of this particular chess set is two words: Harry Potter. Those who are fans of the franchise love playing a game of chess just like the main characters did in the movie.

All the pieces are very similar, if not the same as they are portrayed on the big screen, which adds authenticity to the chess set and the playing experience. The chess pieces are also made with high-quality resin plastic, making them look like stones—a big plus for Potterheads.

Tidying up is a breeze with this Harry Potter-inspired set when you are done with the game and have successfully beaten your opponent. The set comes with two carrying pouches, one for each color, to make it easier to sort the pieces. When they are inside their respective pouches, you can safely tuck them away inside the board until your next game.

The cardboard board is also very sturdy despite being made with relatively flimsy material. You can easily keep both the board and the pieces in perfect shape and order with extra care.

If you’re super careful, you might end up passing it down to the next generation, just like Ron’s family’s chess set.

Another plus with The Harry Potter Final Challenge Chess Set t is its weighted pieces. This reduces the chances of the pieces toppling over even when the game starts to become more intense.

The high-quality chess set can also be used for display purposes for those who aren’t interested in playing the game. Your friends will turn green with envy when you show them you have your very own Harry Potter wizard’s chess set.

The first thing you should know about The Harry Potter Final Challenge Chess Set is that the pieces don’t move independently. This isn’t an actual wizard’s chess, so if you’re expecting them to move and destroy each other as they did in the movie, you’re out of luck.

Aside from their inability to move and follow orders, the chess pieces are also a little top-heavy, so they tend to topple when they aren’t positioned correctly, so be careful when setting up, or your chessmen might fall and surrender before you’ve even made your first move.

The product is also not the best kind of chess set for severe players. This is more a piece of movie memorabilia for fans. If you plan to give this to an expert chess player, they might not appreciate the design or the reference.

To all Harry Potter fans out there, this is a must-have. This set will make it feel like you’re part of the wizarding world, whether for display or actual gameplay. 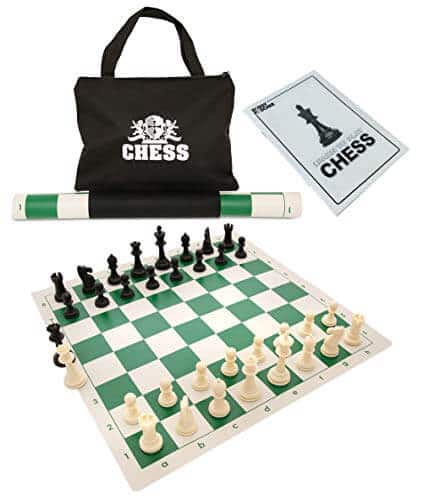